Since I joined ships in 2013, I’ve wanted to go to Alaska.  When I was finally able to go there last contract, I was not disappointed!  Every Sunday from June until September I ported in Juneau.  The weather was often … END_OF_DOCUMENT_TOKEN_TO_BE_REPLACED

Newsflash:  I love food. I particularly love breakfast food.  Brunch would probably appear on the list of my top 5 favorite things.  Thus, when I had every Thursday morning off in Victoria, a lovely small city on Vancouver Island, I … END_OF_DOCUMENT_TOKEN_TO_BE_REPLACED

At the end of our Trans-Pacific crossing, we had one stop in Nanaimo, Canada, a small city on the east coast of Vancouver Island.  I set out with a small group of friends for a walking tour, led by a … END_OF_DOCUMENT_TOKEN_TO_BE_REPLACED

The 14-day trans-Pacific cruise included three stops in Hawaii.  The first one, Kailua-Kona on the island of Hawaii, came after 6 straight days at sea.  I had more than a small case of cabin fever, so I ventured out in … END_OF_DOCUMENT_TOKEN_TO_BE_REPLACED

The first few months of my contract, most ports were South Pacific islands. Due to rehearsals installing production shows and mystery dinner theater, I didn’t often get off and explore. I did, however, have a few standout days in Lautoka, … END_OF_DOCUMENT_TOKEN_TO_BE_REPLACED

My final morning in Paris, I met up with one of the girls from the bar crawl to go to Musee d’Orsay. Before heading to the museum, we stopped at Café Kitsune for coffee and pastries. We took our drinks … END_OF_DOCUMENT_TOKEN_TO_BE_REPLACED

When I booked my day at Versailles, I also signed up for “Bike Le Marais & Canal” the very next day! After walking around so much at Versailles, the thought of biking the city was a little daunting, but my … END_OF_DOCUMENT_TOKEN_TO_BE_REPLACED

Monday morning, I woke up ready to move. I had researched adult ballet classes in Paris, but was shocked by the lack of options. One class that I found was at the Centre de Danse du Marais, a 20-minute walk … END_OF_DOCUMENT_TOKEN_TO_BE_REPLACED

I travel a lot (obviously), but rarely do so on my own. The thought of 6 days alone in Paris was both exciting and terrifying. What would I do? Who would I talk to? What if I needed help? These questions and more were racing through my brain in the days and weeks leading up to my trip.

View from my window

My flight from Berlin to Paris was uneventful—just how I like it! Upon landing, I was able to easily grab a cab to take me to my Airbnb studio apartment in the 1st arrondisement. As instructed, I knocked on the landlady’s door for the key, but hit a roadblock when she showed me a notice for the building. I don’t read or speak French, and she didn’t speak English. We were able to communicate well enough for me to understand that she’d email my host to explain the situation. First problem: solved.

With keys in hand, I set off, hauling my large suitcase, duffel bag, and tote up to my 5th floor walk up. Along the way, I had to unlock and weasel my way through 3 different doors. By the time I got to my room I was sweating, but as soon as I set down my things and looked around, I relaxed. The apartment was small, but had plenty of room for just me. It had beams and vaulted ceilings, seemingly a renovated attic space. Windows lined two sides of the room, offering nice views and, as I learned the next morning, plenty of natural light. The bed was comfortable, and the décor simple. It was, in a word, charming. My host had also left me a welcome note, directions (complete with photos) on how to operate the television and windows, and a numbered list of bakeries, restaurants, and grocery stores with a corresponding map. 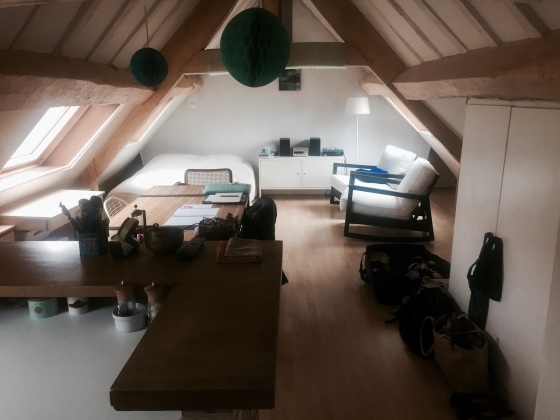 I was too hungry by this point to even look the map. I grabbed my wallet and keys, and set off to find food. I ended up at a nearby Mediterranean restaurant called Liza. I treated myself to the Liza Paris, champagne with rose syrup, and a delicious entrée of chicken skewers served with roasted potatoes, white cabbage, and grilled zucchini and cauliflower. Instead of dessert, I ordered a single espresso. Although the waiters at first seem flustered by a young woman dining alone on Saturday night (they initially seated me at a 4-seat table, then asked me to move to a smaller one), they were kind and attentive. The meal was delicious, and I was able to enjoy some sneaky people watching. It was a lovely start to my time in Paris.

I woke up the next day ready to explore! My first stop was La Moulin de la Vierge, a bakery/café recommended by my host. I sat at a small table outside, across from a lovely old church, and enjoyed a double espresso and delicious croissant—flaky, buttery, soft and crispy at the same time—that I fear has ruined American croissants for me forever. I next walked to the Louvre. The lines were atrocious, so I took a few photos outside, and continued walking, hoping to stop as La Musee des Artes Decoratifs. The line there was also daunting, so I strolled through the Jardin des Tuileries to the Musee de l’Orangerie. After a short wait, I was granted free admission to see the 8 giant Monet water lily paintings and the extensive Impressionist exhibit housed at the museum. 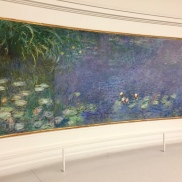 I wove my way back towards my apartment, window-shopping along the way. I made the mistake of going into Bonpoint, a children’s clothing store, and almost walked out with a cashmere onesie for my future nephew. Luckily, reason got the best of me and I resisted the impulse. I also stopped in Le Pain Quotidien for a latte and avocado toast. While sipping on the latte, I had a bizarre encounter with an older gentleman sitting behind me. He tapped me on the shoulder, asked if I spoke French, and then in broken English explained that he felt he needed to say hello because I looked just like the woman on the cover of his book. He handed me the book so I could take a look, and I had to agree that the resemblance was remarkable. The title of the cover painting translated to “The Woman Between Two Worlds.” I have since tried to find a picture of the painting or that edition of the book, but have been unsuccessful. The title struck me, because I felt it sort of applied to me at that moment. I’ve been feeling disconnected in my present circumstances, but anxious and unsure about the future. I continued to have an amusing conversation with this man, as he asked about what brought me to Paris. He found my career fascinating, and had many questions about my training and ambitions. After I politely declined to exchange contact information, he wished me luck and said goodbye.

I sat there for a few more minutes, reflecting on the strange encounter and on my trip thus far. My time in Berlin and first day in Paris had made me feel more relaxed and refreshed than I had in months. I didn’t know why, but I felt I was right where I needed to be.

I returned to my apartment for a short rest and a wardrobe change, and then set off for the Champs-Elysses. I grabbed an outdoor table for one at Café George V, and ordered a kir royal. While I was enjoying my cocktail, accompanied by a sampling of pretzels, popcorn, and pizza, a young man at the table next to me introduced himself. It seems I was especially approachable that day! His name was Mark, and he was born and raised in Paris. He asked what brought me to town, what I’d done since I arrived, and suggested some bars and clubs that I should check out. I got the sense that an invitation was soon to come, but I had to run to catch a performance next door!

The performance was at the Lido de Paris. I have been intrigued by this show for years, because it was choreographed by Benoit Swan Pouffer, former director of Cedar Lake Dance Ensemble in New York, and produced by Franco Dragone. Additionally, it is known for hiring tall dancers. As a dancer that has had limited opportunities because of my height, I applaud any employers and productions that appreciate women of stature. My ticket included a glass of champagne and pre-show entertainment, which unfortunately included multiple performances of “Happy Birthday.” The show was quite a spectacle, full of glitz and glamour, and celebrated the beauty of Paris. The choreography was not what I had expected, but it was entertaining. An ice-skating pair and adagio couple wowed the audience, but in my opinion, broke up the progression of the show. A male dancer dressed as a mime opened the show performing a few magic tricks while popping and locking, and returned to the stage multiple times during the performance. He was amusing and a unique mover, but I felt he overstayed his welcome. Nevertheless, it was an entertaining evening!

Showing off my bevel

After just a day and a half, my fears were dissipating. I enjoyed being able to move at my own pace, follow my whims, and be a little selfish! I went to sleep that night, unsure of what the next day would bring, but feeling more calm and confident than I had in months.

I’m going to take a break in the recap of my last contract to share some of my vacation travels. This vacation, I finally went to see and audition for some shows that I have been talking about and looking … END_OF_DOCUMENT_TOKEN_TO_BE_REPLACED