About two months into my contract, I started talking to a Serbian waiter. Despite my insistence that I would not get into another relationship, we became an item. He helped me through a lot of the rough times I faced during my contract, and was also a part of the best. He left for vacation about a month before I did, and came back one week after my contract ended. Anxious to see one another again, we made plans for me to visit him on the ship. 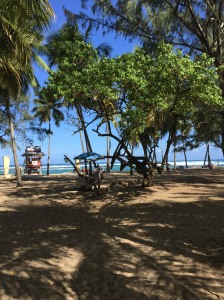 We made a deal. He would book me a room for 2 weeks if I got myself to San Juan. I found flights arriving Saturday night, so I could be well rested by the time I saw my Serbian at the ship on Sunday. There was a snowstorm coming to Dallas, and since DFW more or less shuts down during winter weather, I flew out a day early. That left me with a whole day to play in San Juan!

I checked into my hotel around 9pm, and went to bed early. I woke up the next morning in time to take advantage of the breakfast buffet, and then asked the front desk for a beach recommendation. I followed the concierge’s suggestion and went to El Escambron, a beautiful beach near Old San Juan. It was quiet, considering it was Saturday, and the sun was shining. Palm trees allowed for shade when needed, and the cool water, although it was rocky, gave relief from the heat. I spent my time resting, people watching, and breaking in the new sun hat my sister gave me for Christmas!

After a workout at the hotel fitness center, I took a cab to Old San Juan for dinner.   Going off the driver’s recommendation, I went to Mojito’s for mofongo, a traditional Puerto Rican dish. When I showed up looking for a table for one, I was encouraged to take a seat at the bar. Awkwardly enough, I was the only person sitting there. My dinner was decent, but not remarkable, and as soon as I was done, I went back to the hotel to get some sleep.

The next morning, I went down to the breakfast buffet, and then spent an embarrassing amount of time fixing my hair so I looked my best when I saw my boy. I checked out of my room, and then sat in the lobby with a book. I was hoping reading would calm my nerves while I anxiously awaited his arrival. Shortly after noon, he came to the hotel, and together we went to the cruise port. We were “that couple” in line, completely oblivious to our surroundings because we were so happy to be together. It was perfect.

After boarding the ship and greeting the familiar security team, I went to the Schooner Bar to wait until my cabin was ready. Another Serbian friend was working at the bar. I filled my waiting time catching up with him and meeting the other bartenders. I ended up spending a lot of time with them during my two weeks on board.

The first week, I was lucky enough to have a balcony cabin, so I was able to enjoy sunsets (and a sunrise) outside. I felt like a princess! I was able to eat in the dining room at any time, and could wear whatever I wanted. It was a completely different experience in a totally familiar place. My boy had to work dinner and breakfast shifts, but we had afternoons and after-work hours together. I would visit him at breakfast, and at dinner he would stop by my table to chat and make sure I was enjoying myself.

The first two port days we stayed on the ship, but in Antigua, we decided it was time to get out! We took a cab out to Turner’s Beach. It was a long drive, but the beach, with white sand, gorgeous blue water, and cows at a nearby farm, was worth the trek. While we were searching for a place to sit, and woman I had dined with the night before called my name. She and her husband were leaving, but had bought an umbrella for the day. They graciously let us take it over! My white skin was grateful for the shade! The boy and I drank a few beers, went swimming, and chatted the day away.

The next day we were in St. Maarten. As soon the breakfast shift was over, we walked downtown. Along the way, we ran into some of my ice skater and his engineer friends. When we got too hot, we stopped in a little restaurant for a quick, cold drink, then found some lounge chairs and an umbrella on the beach. I entertained the idea of renting jet skis, but was so content relaxing and talking with my guy, that we ran out of time! We got back to the ship with just enough time for him to shower and get to work.

The following day, we took a short cab ride to Rainbow Beach in St. Croix. There were lush trees separating the beach from the road, and while the beach wasn’t large, it was pleasant. We befriended a dog, shared a crazy rum cocktail, and enjoyed a cool swim in the ocean. Water sports were available, but we opted to just lounge on the sand. There was a restaurant, Rhythms at Rainbow Beach, with live music and a diverse menu. After splitting a curry chicken sandwich and crab cake sandwich, we started walking back to the ship. We walked primarily on the beach, carefully navigating our way over a few rocky patches, and moved to the road to go around a couple private beaches. Although it wasn’t the leisurely stroll in the sand that I was hoping for, it was a fun walk. My boy had to hurry to work, but I sat on my balcony, called home, and reflected on what a wonderful week it had been.

After 6 days at sea, I was dying to get off the ship!  Our first port after the crossing was St. Maarten.  My dance captain and her boyfriend had been there many times on previous contracts, so I went off with them, happy to have experienced tour guides.  We stopped just outside the port for coconut smoothies (with rum) to enjoy while we walked into town.

We went to Honky Tonk, the “crew bar” of St. Maarten.  After enjoying some massive burgers and a bit of wifi, we took buckets of Desperados to the beach.  It was hot and sunny, and the water was nice and warm.  There were two other ships in port with us, so we met a lot of crew members from the other ships.  One of the guys I met was also from Texas.  It turns out that he spent the past couple years teaching at one of the dance studios I trained at!  It really is a small world.  I also ran into one of my production managers from my first contract.  It was great to catch up with him.

Once I got tired of sunbathing, I rented jet skis with a few friends.  I haven’t been on a jet ski, so riding one alone was a little scary.  After a few minutes, however, it was exhilarating!  I loved feeling the wind as I rushed over the waves.  It was a great way to kick of my three weeks in the Caribbean!

Our turnaround port during Caribbean season is San Juan, Puerto Rico.  Our first day there, I went with my roommate to Old San Juan.  We spent the day wandering through shops and bar hopping.  I ate some delicious mahi tacos on a beautiful patio, and drank some fantastic white sangria.

In Barbados a couple days later, I went to another “crew bar” called Boatyard.  They gave crew members a discounted cover price that included drinks, food, and a shuttle back to the ship.  The beach on site offered plenty of diversions.  There was a volleyball net, so I played a few games.  I loved letting out my competitive spirit!  There was also a water trampoline and a rope swing and diving platform at the end of the dock.  It was such a fun day!  I felt like a kid again.

Next we hit St. Lucia.  I joined a dancer and a guy from the Casino to go the the beach at Pigeon Island.  I was pleasantly surprised to find working wifi on the beach!  We had lunch at a shack in the sand, then rented lounge chairs and an umbrella (this redhead needs her shade!).  The boys also rented snorkeling masks.  The views from the beach were stunning, with lush green mountains across the way.  The beach was small, but the day was nice and relaxing.

In Antigua, my roommate, her boyfriend, and I went to Valley Church Beach.  This beach had white sand and crystal blue waters.  It was hands down the most beautiful beach I’ve seen so far!  We had a few drinks and a bite to eat at a restaurant on the beach, then just relaxed in the sunshine.  The water was cold but refreshing.  I spent a good amount of time attempting to float, though I didn’t have much luck. 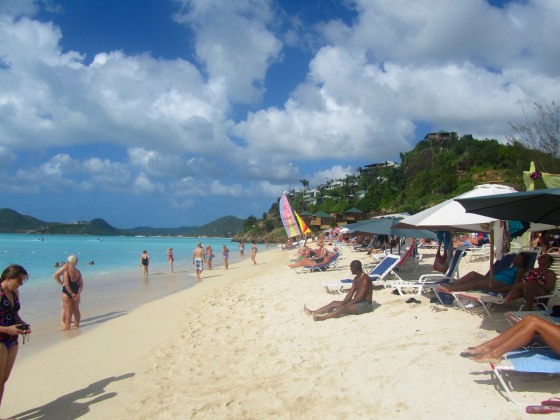 I got off alone in St. Croix, hoping to find wifi and enjoy a bit of rare alone time.  Unfortunately, the weather didn’t cooperate.  As I was walking in the sand, it started to rain.  I sought cover at a nearby restaurant, and ran into a couple friends.  I ended up wandering over to another bar with them during a break in the rain.  The owner of the bar was from Texas as well, and decorated the place with funny Texas bumper stickers.  I chatted a bit with her about our home state, and met other guests that were visiting from San Antonio.  Texas reunion in St. Croix… Why not?!

So far, my time in the Caribbean has been full of fun and sun.  I have just 5 days until I go home.  This had been a great place to end my Adventure!