I had plenty of remarkable days while working on the Adventure, but were truly extraordinary.  I’ve been thinking back on the last few months, and have come up with some places and activities that deserve special recognition. Best Beaches In … END_OF_DOCUMENT_TOKEN_TO_BE_REPLACED

With my parents in August, my friend in September, and fellow crew friends in recent weeks, I’ve explored St. Kitts much more than usual! I’ve learned quite a bit about the island and have seen more of the great things … END_OF_DOCUMENT_TOKEN_TO_BE_REPLACED

After late shows on Day 2 of last cruise, I rolled out of bed to sneak backstage and call my beau. The 6-hour time difference can make it difficult to find time to talk, so I was happy to catch … END_OF_DOCUMENT_TOKEN_TO_BE_REPLACED

Now that I’ve been home for awhile, I’ve had time to reflect on the highlights of my contract on the Independence. Since we did the same two 7-day runs for the entire contract, there are fewer places and excursions to … END_OF_DOCUMENT_TOKEN_TO_BE_REPLACED

The week before my birthday was very special. For the first time, both my parents were able to visit me! Sunday morning, I woke up early to get coffee and talk with my man before meeting Mom and Dad at … END_OF_DOCUMENT_TOKEN_TO_BE_REPLACED

The HR office advertised 12 crew spaces on a tour to Dolphin Discovery in St. Kitts. Excited at the prospect of swimming with dolphins, I signed up as soon as I could, and tried to convince my friends to join. … END_OF_DOCUMENT_TOKEN_TO_BE_REPLACED

My day in St. Kitts was supposed to start with a drill, but due to a medical emergency onboard, it was rescheduled. I filled the unexpected free time with a long phone call with my beau, and then headed to … END_OF_DOCUMENT_TOKEN_TO_BE_REPLACED

Although I was staying on for a second week, I had to get off the ship for at least an hour in Puerto Rico.  I disembarked around 10:00, after seeing my man at breakfast, and went to Plaza Las Americas. Luckily, I was able to leave my luggage on board, so I was traveling light at the mall.

Crew wasn’t granted shore leave until about noon, so I had some time to kill before my guy arrived.  I caught up on the emails I had ignored all week, and then got a manicure. My basic Spanish and the manicurist’s non-existent English made for an interesting experience. A big, burly man getting his nails done at the next table stepped in a few times to help translate. 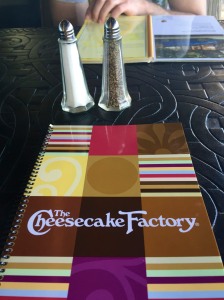 I finished just after my boy showed up. We found a café, grabbed a nice cup of coffee, then wandered the mall for a few minutes. We saw a few friends from the ship, but enjoyed having time just the two of us. For lunch, we went to the Cheesecake Factory at his request. He had never been, but had heard a lot about it. Although we both ordered lunch portions, we were unable to finish our meals. We shared a delicious piece of caramel cheesecake, and then had to hurry back to the ship.

Our next port was St. Thomas. It was pouring rain when we stepped foot on land, but we decided to stick with our original plan and go to the beach anyways. Having heard good things about Magen’s Bay, we suffered through a rollercoaster-like cab ride to get there. The rain had stopped by the time we arrived, so we were able to comfortably stroll down the beach in search of a place to sit. We set down our things and waded into the water just as the sun was breaking through the clouds. I was amused to see pelicans swimming nearby, and spent much of our time on the beach watching the birds clumsily dive into the water. Despite their awkwardness, they were very successful fishermen! I was teased for my fascination with the pelicans, but we both spent the afternoon laughing at them (and each other). 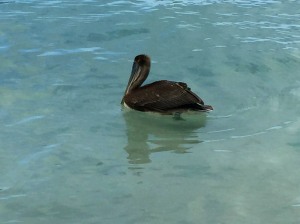 The next day, we were both pretty worn out. Instead of walking to an infinity pool, we just went to a bar next to the port. We saw some friends, drank a few beers, and chatted about a variety of topics. In the two weeks I was cruising, we never ran out of things to say! Before we went back to the ship, we stopped to take pictures with some monkeys. They crawled all over us, and for every good photo, we have about 5 disheveled ones. In about 5 minutes, we got over 30 photos. It was silly and overpriced, but made us both smile.

The following day we went to Eagle Beach in Aruba. Although my guy is afraid of heights, I convinced him to go parasailing with me. We took a little boat over to Palm Beach, where we climbed into a different boat. 5 minutes later, we were harnessed up and floating towards the sky. We could see the entire island of Aruba, including our ship on the other side, and a wide expansive of sapphire blue sea. We were able to hold hands, and as long as he didn’t look straight down, he had a great time. As we were being pulled back in, we were dipped in the water. It was freezing, but we were both laughing as we were pulled the rest of the way in. When we returned to the beach, some of our friends from the Guest Services team joined us. We swam, sunbathed, and rode a city bus back to the ship. Despite multiple applications of sunscreen, we ended the day looking like a pair of lobsters.

Our last port was Curacao. We took a cab to Mambo Beach (also known as Seaquarium Beach) and shelled out a hefty sum for shaded lounge chairs at the quiet Lions Dive & Beach Resort. We had a beer and took a quick swim, but after excess amounts of sun the day before, we didn’t last long at the beach! We taxied back to the ship, and then walked into the town. None of the restaurants were speaking to me, so we returned to the ship. I grabbed a few sandwiches from Café Promenade while my boy got cleaned up for work, and we spent his last hour off relaxing and snacking in my cabin.

I had one final sea day before returning home. I grudgingly packed my suitcase, and spent the afternoon by the pool. We made the most of my last night on board. As soon as he finished work, we went to the Schooner Bar and Jesters, the nightclub, for a couple drinks. The next morning, I went to see him at work as usual, and he walked me down to my waiting point. I managed to keep it together while I was on the ship, but started crying when I reached the airport. It was a wonderful two weeks, full of sunshine and laughter, and as much as I love my family, I didn’t want to go home!

At least I had a towel monkey to help me pack!

Relationships, I’ve decided, are the hardest part of working on ships. You make special connections with people, but maintaining those connections are difficult. Most of the friends I’ve made during my contracts, I will likely not see again in person. My beau and I are trying to beat the odds, and he’s attempting to transfer to my next ship. Cross you fingers and toes for us!

Stay tuned for details about my weekend in Portland!