The HR office advertised 12 crew spaces on a tour to Dolphin Discovery in St. Kitts. Excited at the prospect of swimming with dolphins, I signed up as soon as I could, and tried to convince my friends to join. Since many of them are saving money to pay off student loans, I was only able to recruit one other dancer. 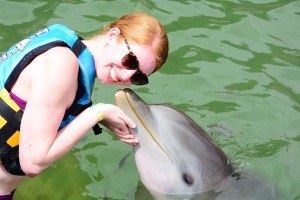 We met outside the HR office and were led outside to meet our guide. We were combined with guests and herded into three large vans. Less than 10 minutes later, we arrived at the facility. We were instructed to put our belongings in a locker, get a lifejacket, and line up in three groups. My friend and I joined the other crewmembers in the third group.   Among them were two musicians, two girls from cruise staff, and a girl from HR. 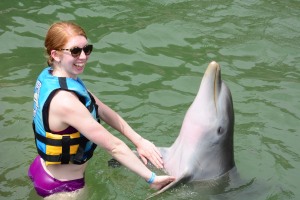 An employee took us to a pier behind the building. There was a fence in the water, closing off the area, but keeping sea water flowing in. We walked along the pier to a staircase leading into the water. As soon as we got in, a dolphin came up to our group’s trainer. The trainer introduced him as Dante. 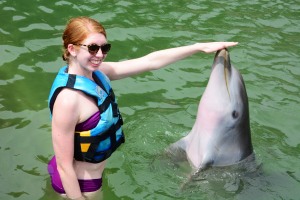 Dante the Dolphin seemed a little older and more tired than some of the others playing around, but he was spunky. As we were guided through activities with him, you could easily distinguish who he did and didn’t like. For some reason, Dante seemed to dislike my friend from cruise staff! 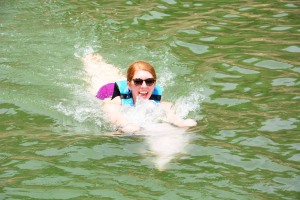 Each person in the group was able to rub the inside of Dante’s fins, kiss his nose, receive a kiss on the cheek, and hold out a hand for him to bump. We were also able to swim out in the water, and Dante would come up behind one person, swim on his back, and allow the person to grab his fins and he pulled us through the water. I didn’t just swim with a dolphin; I swam on a dolphin! For the last activity, we swam out on a boogie board, held our legs out straight behind us, and Dante pushed one foot with his nose, driving us forward. He was very strong, and pushed very quickly!

After playing with a group of 20 people, Dante was tired. He was rewarded with fish throughout the day, but he still seemed ready for a break. Before we left, Dante mustered the strength to show off a few tricks for us. As much fun as I had, I couldn’t help but wonder how well he was treated, and if it is really fair to keep him in a restricted area. 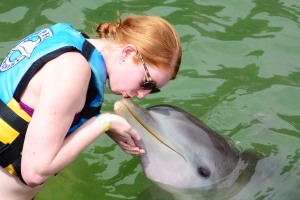 We were led back to return our life jackets and retrieve our belongings, and then were ushered into a gift shop to view our photos. Cameras were not allowed, so if you wanted any photographic evidence of the day, you had to purchase photos. The prices were a little obscene, but my friend and I still bought some!

In spite of the moral questioning, I had a great time playing with a spunky, graceful creature. Thanks, Dante!