The past few days have been a bit of a blur!  Since finishing the Movies show on Tuesday, our schedule has been filled with review times and full runs of both productions.  We also spent some time cleaning up the Welcome and Farewell numbers that we learned the very first day of rehearsals.  My brain has been working hard, and my body has been working even harder!

Each day has had a special sprinkle of excitement, so I haven’t completely lost my mind.  Wednesday evening, my cast had a luau at the apartments to celebrate a cast member’s birthday.  It was awesome!  She decorated the apartment, and we played “pin the flower on the hula dancer”, hula hooped, and ate… a lot.  It was so nice to hang out with the full cast.  It really is an amazing group of people!

Thursday we ran the first half of the Movies show in the morning, and after notes and cleaning time, ran the entire show again in the afternoon.  When we were done, we got to watch one of the other casts perform for their office run.  They did another Broadway themed production.  It was fun to cheer them on before they embark on their trip to the Caribbean!

Friday was a very long day!  We had our “unofficial run” in the morning, during which we performed our Broadway show with lights and mics for members of the staff.  It was a little unnerving to have an audience, especially for my Cell Block Tango monologue, but it went pretty well!   We won’t run that show again until we are on the ship!  In the afternoon, we ran the Movies show.  It was our first run with lights, and just the second full run of the show! 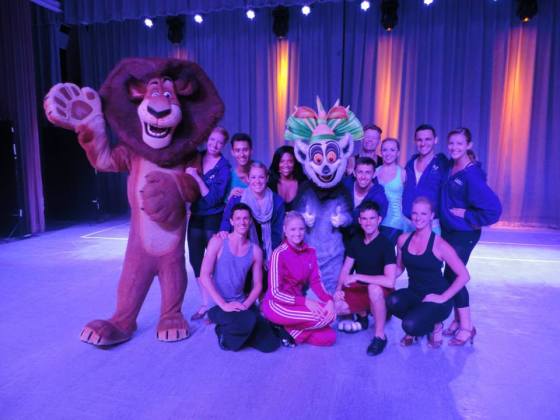 Surprise guests before the afternoon run

At rehearsal on Saturday, we are running the Movies show twice through, and spending time working out any kinks.  We have a day off on Sunday, and our last day in the studio (and our office run) will be Monday!  I can’t believe how quickly this rehearsal period has gone by!  I’m looking forward to all that is in store for us!

For your listening pleasure today, I’m going back to the 80s.  Fun fact: this was randomly my high school class song.