Last cruise, the ice captain organized an outing to Preikestolen for a hike up to Pulpit Rock. When we docked in Stavanger, 26 members of the crew, mostly from the cruise division, met at the gangway. We had a quick walk through town to the ferry station, then were able to buy ferry and bus round trip tickets once on board. 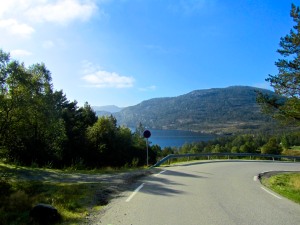 The ferry ride took about 30 minutes, and then there was a 15-20 minute bus ride to the mountain. When we got off the bus, our leader set a time to meet back at the bus stop, and we broke off into smaller groups to hike. 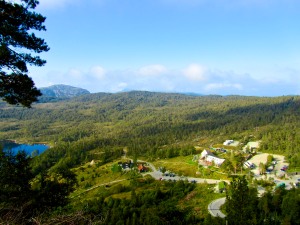 The entire way up, I was astounded by how beautiful my surroundings were. Up, down, left, right… Everywhere I looked, there was something to take my breath away.

Some parts of the climb were harder than others. For example, some portions were just rocks, and since it had recently rained, it was a bit slippery. I was tired and sweaty by the time I reached the top, but it was worth it! 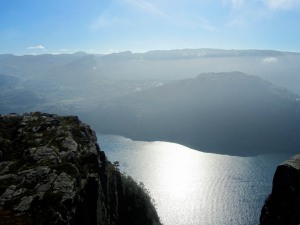 Looking across the way, there were more mountains. The valley in between had a large river. The edge of the main cliff dropped straight down. Sitting on the edge for a photo, I was simultaneously scared and stimulated. There was actually a line for photos there! 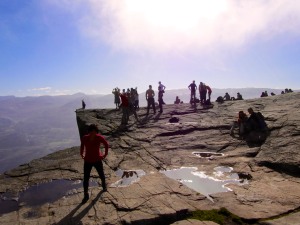 Waiting for the perfect photo

I had about thirty minutes until I needed to head back down, so I took a seat with some of my friends and we pulled out the sandwiches we had snuck off the ship. After our little picnic and a few more photos, we started down.

In the steep sections, going down was almost harder than going up. My knees hurt by the time it was all over, but I felt rejuvenated after breathing the fresh mountain air. 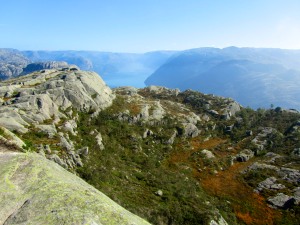 We caught the bus and ferry back to Stavanger, and had just enough time to walk through town before our all-aboard time. The day, in a word, was perfect.

Life doesn’t get much better…

5 thoughts on “On Top of the World”