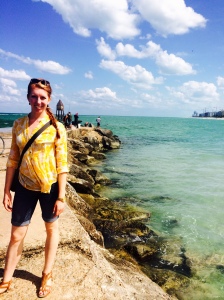 Seeing as I like to maintain a work/play balance, I’ve been spicing up this rehearsal process with some fun outings.  Some (at least one) were educational and inspiring, some were extremely unhealthy, and some were simply necessary.  Here’s the run-down in chronological order.

I joined my former roommate and one of my new cast mates to see Miami City Ballet’s mixed repertoire performance, Points of Departure.  The show opened with George Balanchine’s “Raymonda Variations”.  The corps dancers had beautiful technique and were delightfully clean.  The soloists performed Balanchine’s intricate footwork with ease and flavored the choreography with vibrant energy.  In a new piece by Justin Peck entitled “Heatscape”, the company stepped into the realm of contemporary movement.  While some dancers thrived, most notably Patricia and Jeanette Delgado, others seemed sloppy and uncomfortable with the less structured style.  Patricia Delgado shone again in the final piece of the evening, Jerome Robbins’ “The Concert”.  It was an amusing end to a diverse performance.  I thoroughly enjoyed the show and was impressed by the company.  It’s been awhile since I’ve seen a performance by dancers I’m unfamiliar with.  I found it refreshing to be able to watch with an unbiased eye and simply appreciate who and what caught my eye.

The following day, my suite mates and I stopped by Target and then went to a coffee shop for a late lunch.  Alaska Coffee Roasting Company had a nice Colombian brew as their coffee of the day.  They also had a great food menu!  I enjoyed a chicken and spinach sandwich, and my friends had a flatbread pizza with mushrooms and an antipasto salad overflowing with grilled vegetables.  I’d gladly return there on my day off!

After the Cheesecake Factory

The days after Office Run were full of celebrations.  Right after the run, I was one of a party of 15 at the Cheesecake Factory.  After a delicious ahi tuna salad and a couple whiskey smashes, I returned to the apartments to keep chatting with some of the cast.  It was great to have more time together outside the studio!  The fun continued the next night, when about half my cast went to Duffy’s for drinks.  I had a surprisingly good strawberry martini that got even better when I learned it was 2-for-1!  Another cast was at the same bar, so I was able to spend time with a lot of people.  The waterfront location was beautiful, and although I’d never swim in it, there was also a pool.  A few friends managed to end the evening on a yacht docked outside.  I played it safe at went home relatively early!  The weekend ended with a girls’ outing to Aventura Mall.  I got a mani-pedi, bought some workout tops on serious markdown at Gap Body, and had a great seafood salad at Grand Lux Cafe.  It was a busy weekend, but I started work the next day feeling refreshed! 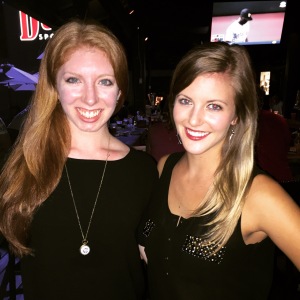 At Duffy’s with my buddy

This past Saturday, I joined 4 of my cast mates for dinner at TGI Friday’s.  I’m not a huge fan of the food there, but the company was great.  I spent most of the meal laughing!  After dinner, we met up with a few more cast members at the apartments.  Although this cast is large, I’m gradually getting to know everyone.  It had been a long week, so I faded pretty early.  The next day, my roommate and I went to Surfside for brunch at a small cafe.  We stopped in a little boutique, had some non-dairy ice cream at a yogurt shop, and then walked to the beach.  I had no desire to wear a bathing suit, but loved having my feet in the sand!  We walked and talked while wading in the water, and found ourselves stuck behind a row of condos at Bal Harbour.  Before we made it back to the street, we came to a dock with incredible views.  What was originally supposed to be just brunch became a beautiful day outside!

I have just one weekend left before joining the ship, and I intend to make the most of it.  As much as I’m enjoying Miami, I am excited to get back to sea and visit new ports!