A couple days ago, I was lucky enough to visit the Great Wall of China.  Needless to say, I was eager to see it.  The prospect of visiting this World Wonder weighed in to my decision to accept this contract.

The Great Wall of China

I was part of a large crew tour, so it took awhile to get everyone off the ship and onto buses.  We had approximately a two and a half hour drive from the port in Tianjin to the Great Wall.  I slept for most of the drive, and played Spider Solitaire and took in the sights for the rest.  Driving through China was fascinating.  The landscape quickly alternated between developed towns and wide-open spaces.  Some of the areas we drove through, including our port city, actually used to be water.

Carting to the top

By the time we reached our destination, we only had about an hour and a half before we needed to head back to the ship.  I was one of many crewmembers that opted to take a golf cart to the top of the wall rather than hike up from the bottom.  The hike takes around two hours, so there was no way to make it all the way up.  I’d love to go back some day and climb!

View from a turret

Even though I rode up the mountain, I worked up a sweat walking up and down the stairs that cover much of the wall.  I wanted to see as many sections as possible, so I moved quickly!  It was interesting to see the range of the age and type of stones used throughout.

The views were absolutely incredible.  The wall weaves like a giant snake, and from any point you can see beautiful mountains and trees.  I was actually surprised by how narrow the wall is.  It is about the width of a single lane road.  The length, however, is astounding.

Before riding back down to the bus, I wandered through a little market.  I attempted to bargain with an old woman for a pack of postcards, but ended up paying her asking price.  Some friends of mine were more successful negotiators.  Apparently I need to work on my bargaining skills.

I slept through much of the bus ride back, then had a busy evening on the ship.  I learned how to work the spotlights for the ice shows, participated in a passenger drill, and performed a short number in a Welcome Aboard show.  It was an exciting, exhausting day! 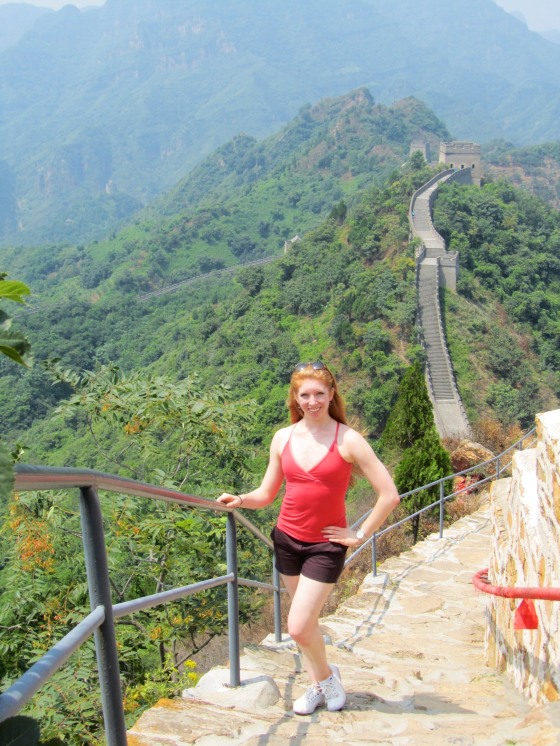 If you ever want to read an amusing, non-fiction book about China, pick up a copy of Lost in Planet China by J. Maarten Troost.  It’s about a spontaneous tour of this giant country.  The author is moderately crazy, occasionally clueless, but very entertaining.

4 thoughts on “The Aptly Named Great Wall of China”