In Barcelona two weeks ago, I set off with one goal… to see La Sagrada Familia. 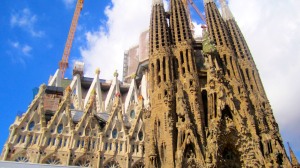 When I was about 11 years old, my sister and I went to Europe with our dance company. Being “big girls”, we didn’t want our parents to chaperone. Mom and dad agreed to stay home, but wanted to make sure we had some sort of cultural experience, so we had to write a research paper about something we would see on the trip. My sister and I spent a day at the library, and ended up writing about Gaudi’s La Sagrada Familia. When we finally saw the church, we were so excited. Now, 14 years later, I was anxious to see the changes in the building. 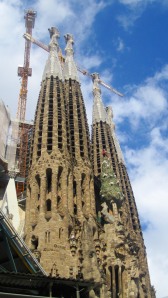 When we got off the ship, some of my girlfriends and I got in a cab and went straight to the church. The line to go inside was already wrapped around the block, so we opted to just enjoy the view from outside this time. It is such an amazing structure. I wish I had my photos from my previous visit so I could compare then and now. Next time we’re in Barcelona, I hope to pre-book and inside tour. 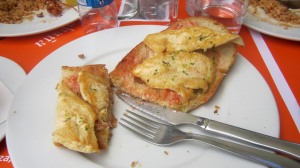 Our next stop was for food. With maps in hand, we set off in the direction of Casa Mila. About halfway there, we found a cute restaurant with tables outside. Since it was a beautiful day, we decided that was the perfect place to stop. I had a “small” sangria (AKA a pitcher), and a chicken copa. It was delicious! 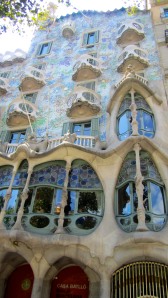 We then continued on to Casa Mila. Unfortunately, it was covered up for repairs, so we were unable to see it. We walked down the street to find Casa Batllo, another one of Gaudi’s creations. The house is incredible. The front is covered in blue and green mosaic tiles, and the windows are full of stained glass. I hope to go back for an inside tour there as well. 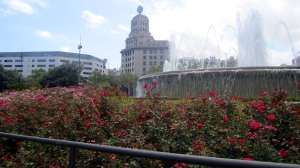 We kept walking in the direction of the ship, and along the way stopped in some shops, a square with statues and lovely flowers, and then came to Las Ramblas. Las Ramblas is full of street vendors and tourist shops, and since it was where the shuttle from the ship dropped people off, it was also full of guests and crewmembers. After running into some friends in the ice cast, we followed their recommendation and went into a market. There was so much food! The butcher stands were unlike anything we see in the States. For example, there were heads still on some chickens! There was also some delicious looking candy, and an abundance of juice stands. I tried a mango coconut juice, and enjoyed it so much; I will probably buy it again next time! 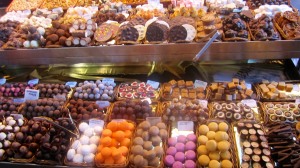 Sweets in the market

Since the weather was so nice, we opted to walk all the way back to the ship instead of catching the shuttle. On the way, we stopped in a few more shops and ran into some other friends. By the time we reached the ship, I was exhausted, but happy. It was one of the best days I’ve had since joining the Adventure. I love Spain! 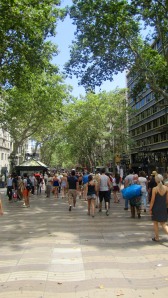 2 thoughts on “Blissful in Barcelona”