The week before we went to Lanzarote in the Canary Islands, the HR team started advertising a crew tour to ride camels at Fire Mountain. Intrigued by both camels and Fire Mountain, I signed up.

The tour actually included much more! We started with a 20 minute camel ride in a national park. The whole island of Lanzarote was formed by volcanic activity, and many of the mountains we were riding beneath are still active volcanoes. The views were stunning, with shades of red, black, and green coloring the landscape.

The camel ride was bumpy, but fun. The animals had a lot of character. Some followed directions better than others, but all managed to stay in line and follow the leader. The men guiding them used an interesting series of commands and noises, and though they had sticks, never struck the animals. Some people felt bad for the camels for carrying heavy loads of people, but we learned before tourism came to the island, they used camels for much more demanding labor.

After the ride, we went to a restaurant and viewpoint at a higher altitude. We saw demonstrations of how hot the volcano was at different depths. At 20-30 meters, a bush caught fire in seconds. At another station, an employee dug up some red sand for us to feel. Just a few meters beneath our feet, the sand and rocks were hot to the touch, maintaining their heat for minutes. Deeper, if cold water was poured down a hole, it shot up in 2 seconds like a geyser. 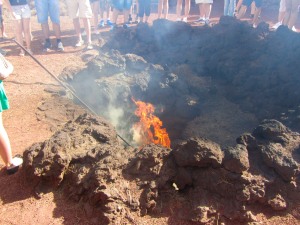 Fire from the heat

The restaurant cooked meat and potatoes on a geothermal grill. They built a hole, covered the top with metal rods, and used the natural heat for food. It was really interesting! Before getting back in the bus, we had 10 minutes to wander around, grab a bite if necessary, and take photos.

Symbol of the island on the restaurant window

Once back on the bus, we drove around Fire Mountain. There was an audio tour informing us about the craters, old volcano eruptions, and still active volcanoes. We also learned about the animals and organisms that live in the national park. 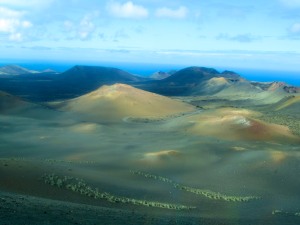 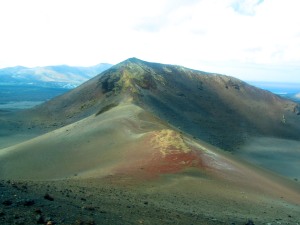 Our next stop was along the water. There were cliffs of black volcanic rock against which waves crashed. The blue water was stunning against the black rock. We had just a few minutes to enjoy the ocean air before setting off again.

Our final stop was a vineyard. Someone discovered that digging holes for each grapevine and protecting it from the wind with rocks created a great environment in which the grapes could grow. I’ve been to many vineyards in Napa and Sonoma, but have never seen any like this! I was pleased to find that the resulting wine was actually very good! I only tried one red wine and a moscato, but would’ve loved to sample more. 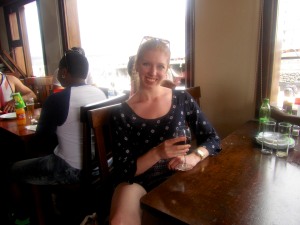 The whole day was full of new and interesting experiences. Although we don’t return to Lanzarote, I feel like I was able to take advantage of all the island has to offer.