The last week our first Cruise Director was onboard, he decided to reward us for some extra work we’d done by rearranging the schedule to give us the day off in Cozumel. Cozumel is a favorite port of many crewmembers, but as we always had a show that night, we had only been able to go out briefly for lunch and wifi. Since we didn’t know if we’d get another opportunity, some of my friends and I decided to make the most of the day by booking an excursion to the Mayan ruins at Chichen Itza.

Dancing at the ruins

The tour met in the theater at 9:50am. We were herded off the ship and to a ferry in the port. The ferry ride was about 45 minutes, and took us to Playa del Carmen. After disembarking the ferry, we walked to a bus. Two hours and fifteen minutes later, we arrived! Having been warned to take motion sickness tablets, I was knocked out for most of the journey. In the time I was awake, I heard our tour guide share some information about Mexico. If any of the following facts are incorrect, please forgive me. I was drifting in and out of consciousness. 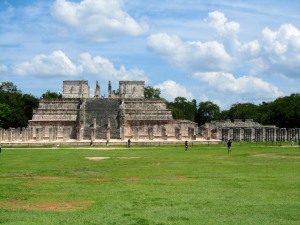 Mexico is made up of 31 states and a federal district, Mexico City. The Yucatan Peninsula, where we were, has three states. Many people in the area are “mestizos”, meaning they have Mayan and Spanish blood. The rainy season is May-October, which came as no surprise to me, as most of my days in Mexico have been rainy. On average, they get 40-50in of rain per year. Traditionally, people of Mayan descent built thatched roof houses. Now, most are concrete to withstand hurricanes.

Now, Mexico is 50% Catholic. During the Mayan period, however, there was a very different belief system. The Mayans believed there were 13 levels of the upper world and 9 of the underworld. The Saba tree provided a visual representation of these levels, with the branches showing the upper echelon, and the roots showing the lower.

Mayans are believed to have arrived in the Yucatan Peninsula around 3000-2000 BC. Their territory spanned about 260,000 square miles. They worshipped a variety of gods, such as Ix Chel, the goddess of fertility. As a fun side note, I performed in a piece called “Ix Chel” with Copious Dance Theater in San Francisco. 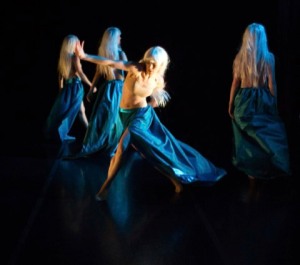 Once we arrived at the ruins, a new guide took over. We stopped first at El Castillo, the main famous temple. If you clap loudly at the base of the temple, the echo sounds like the quetzal bird. Originally, the temple was coated in stucco and red and blue paint. By the time explorers discovered the site in 1895, plants had covered much of the ruins, and the limestone beneath the paint was exposed.

The placement of El Castillo was very strategic, as the shadows and light on the building on equinox days form the shape of a snake, homage to the snake god. At the base of the stairs, there is a stone snakehead. If you walk from the temple in the direction the snake leads, you will come to a sinkhole. This showed the path from heaven to earth, and from earth to the underworld. The changes of all 4 seasons are also shown in the way the sun is framed in the windows and doors at the top of the temple.

After taking some time to appreciate El Castillo, our guide took us to a shaded area and explained more about Mayan culture. The Mayans had different ideas of beauty than we do now. For example, they would apply pressure with wooden boards to the heads of babies to create a pointy skull, mimicking the gods. They would also implant stones on their teeth. Mothers would carry their babies on their hips in order to create bowed legs. 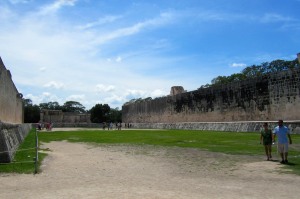 We moved on to the ball court. The court was used for more than just games. The game was a serious ceremony dedicated to the movement of the stars and the fertilization of the soil. The teams were 7 on 7, and the players used various body parts, such as knees and elbows, to get a ball to pass through the rings on the two long walls. The ball was made from heating a mixture of sap from the chewing gum tree and flour, and then put in a circular case. Once there was a winner, one of the captains, most likely the winner, was beheaded. Markings on the walls of the court described the sacrifice. The scene was repeated 6 times on the court.

Near the court was a rectangular structure with skull carvings on the walls. Here, the heads of the beheaded players were placed on a wooden stick for display. After a time, the heads were buried beneath the structure. Around 200 skulls were found inside.

Our guide next took us to one of the merchant stands, run by his brother in law. He explained that commerce was conducted mostly through bartering, but when currency was used, they used cocoa beans. Cocoa was scarce, and Mayans believed it was sent from heaven. I must say, I agree! They were selling a few obsidian products. Obsidian was used to make knives, tools, and death masks. Traditionally, obsidian products were supposed to be cleaned every 28 days during a full moon to renew its purification capabilities. 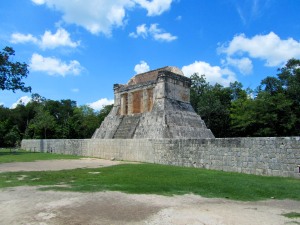 Stands at the ball court

We were given about 30 minutes to wander on our own before returning to the bus. I stopped to get a souvenir for a friend from the ship and for my dad (I bet you want to know what it is!), and then ran to take a few more photos. I was tired by the time I got back on the bus, so I slept through most of the journey again. Although the trek was long, I’m glad I was able to go see one of the new world wonders! The ruins are incredible, and the culture is fascinating. If you have the opportunity to visit Chichen Itza, I highly recommend it!